English coins arrived in Australia with the First Fleet in 1788. Selected coinage of India, Spain, Portugal and the Netherlands also became legal tender in New South Wales after a Government proclamation in 1800. The first distinctive Australian coins were the Holey Dollars and Dumps of 1813, which were produced by cutting the centres from Spanish Dollars. The outer rings were then over stamped as five shilling coins (Holey Dollars) and the inner portions over stamped as 15 pence coins (Dumps). English currency became the official currency of the Australian colonies after 1825.

Many traders and merchants issued unofficial Australian coins, or tokens, during the gold rushes of the 1850s. Adelaide Pound gold coins issued by the Government Assay Office of South Australia in 1852 were never officially authorized by the British Government. Founded in 1855, the Sydney Mint was Australia’s first official coinage mint. The earliest Australian gold coins struck at Sydney from 1855 to 1870 had a unique Australian design and these are known as “Sydney Mint” issues. After 1870, the Sydney Mint struck gold coins of a standard British design. Mints were later opened in Melbourne (1872) and Perth (1899) for the striking of Imperial gold sovereigns and half-sovereigns. 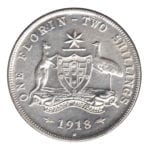 After Federation in 1901, authority over “currency, coinage and legal tender” passed to the new Commonwealth Government. Australia’s first silver coins in 1910 featured an obverse portrait of King Edward VII and were struck at the Royal Mint, London. Australian copper coins first appeared in 1911, the coronation year of King George V. The earliest silver coins struck in Australia were those produced by the Melbourne Mint in 1916. Production of copper coins commenced at both the Melbourne and Sydney Mints in 1919. Minting of gold sovereigns in Australia ceased in 1931, but other pre-decimal denominations were issued until 1964. Australian crowns (five shilling coins) were only minted in 1937 and 1938.

Australia converted to a decimal system of currency in 1966 with the new One Dollar equal in value to the old Ten Shillings. Australian decimal coins issued into circulation are normally struck at the Royal Australian Mint in Canberra. Opened in 1966, the Royal Australian Mint also produces a range of numismatic coins and collector items. These include year sets of the circulation coinage, special commemorative coins and bullion coins struck in both silver and gold. Australian coins year sets are released in both Uncirculated (standard strike) and Proof (premium strike) versions. A Baby Coin Set, with coins in either Uncirculated or Proof condition, is a good way for family and friends to celebrate a new baby’s birth year.

History of the Dollar

The Australian dollar was introduced in 1966, not only replacing the Australian pound (long since distinct from the Pound Sterling) but also introducing a decimal system. The Australian Prime Minister Robert Menzies wished to name the currency “the Royal”, and other names such as “the Austral” and “the Koala” were also proposed.
Due to Menzies’ influence, the name “Royal” was settled upon, and trial designs were prepared and printed by the printing works of the Reserve Bank of Australia. The unusual choice of name for the currency proved unpopular, and it was later shelved in favour of “Dollar”.
On February 14, 1966 the Australian Dollar was introduced at a rate of two dollars per pound, or ten shillings per dollar.

In 1910 an Australian currency was first introduced by the Labor Government of Prime Minister Andrew Fisher – the Australian pound consisting of twenty shillings each consisting of twelve pence. The Australian pound was on the Gold Standard and was equal in value to pound sterling. Prior to this, pound sterling was used in conjunction with banknotes and bills of credit issued by private banks. Coins were first introduced in 1910.
In 1919, the pound sterling was removed from the gold standard. When it was returned to the gold standard in 1926 the chosen gold price unleashed deflationary pressures.

In keeping with Australia’s move to a metric system the value of the new Australian dollar was equivalent to one gram of gold.

Listed rare Australian coins and banknotes may be sold before your order is received or processed.  If that occurs we obviously cannot supply.  In those circumstances we will notify you of that fact, see if you wish to purchase any other coins or banknotes that may be available and otherwise process a refund of monies paid.

Australasian Notes Pty Ltd reserves the right to change / alter prices of any or all banknotes listed within our website without notice.

In the case of mass printed banknotes e.g. Polymer banknotes, reproductions of banknotes in visual form including serial numbers are only facsimiles and not the serial number you may receive.  This includes all uncirculated banknotes, best described as rate and available.

Insurance at client’s request.  Goods are sent via registered mail.  While every care is taken, no responsibility can be accepted and we do advise insurance to our clients.  Cost on application or you can insure through your own insurance company.

Please note that for precious metal coins we can only accept direct deposit.